Last month, the coalition mobilized on a resolution to put before San Bernardino Board of Supervisors calling for the county to reevaluate internal policies on racial equity and the public health crisis facing the Black and Brown community.

Out of necessity, RPSSB shifted its narrative in recent months. They came together to provide the resolution language to the county supervisors last month.

“We reconvened to the table, all of the organizations together to say let’s demand that the county declare racism a public health crisis,” said Rev. Samuel Casey, COPE Executive Director.

He said the community can also get involved and engaged in the implementation of the resolution, starting with reaching out to their Board Supervisor.

“Reach out to your county supervisor, demand that racism is declared a public health crisis,” he said. “This is just the beginning, we’ve got to continue to press and push.”

Actionable steps to address disparities are written into the declaration. Casey said some supervisors seemed receptive, and that Supervisors Josie Gonzales, Curt Hagman and Janice Rutherford were among those who reached out to respond to the coalition’s recommendations.

It’s the first step of more to come.

Although there are tight budget years ahead, he said the RPSSB coalition feels there are several ways to stretch 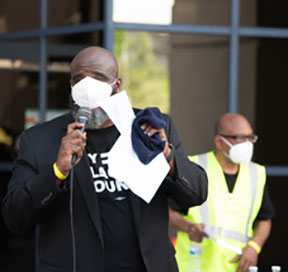 funding to benefit the community.

At the local level, COPE would like to see a similar social action response that spurred Los Angeles Mayor Garcetti to call for a huge pullback in budget resources for the city’s Police Department.

Some funding that goes to police could be redirected to support positive social programs.

“Which means this is an opportunity to push for a reduction in law enforcement spending, and reassign those dollars in other ways,” he said.

As part of the resolution, Casey and RPSSB want the county to review internal policies and procedures to ensure racial equity, identify specific activities to increase racial diversity. They also seek a countywide study on the public health impact of structural racism with strategies for solutions.

Other focus areas include language calling for county efforts to dismantle systemic racism and trauma from overexposure to racial profiling, police brutality and use of deadly force. They want to stop discrimination and exclusion in county practices, to step up police accountability, and to ensure training to elected officials, staff, funder and grantees to stop workplace bias as a public health urgency.

Consisting of several organizations and individuals, the RPSSB coalition is united under Congregations Organized for Prophetic Engagement (COPE), which started three years ago with an initiative calling for accountability for racial injustice in the District Attorneys office.

At the time, RPSSB was also focused on unfair targeting of Black and Brown students and the wrongful incarceration of Black and Latino through the CalGang database.

The coalition is eager to see the language they have written for the Board of Supervisors’ resolution to be implemented in real-time, he added.

“The public health consequences of racial discrimination are vast and stark, and I look forward to having an open, honest discussion about the problem and what we can do to change it with my colleagues on the Board of Supervisors and our residents,” Rutherford said in an email.

COVID-19 is another critical impact issue for the African American community, which now accounts for one-fourth of all deaths related to the virus.

Coming up, the Inland Empire Concerned African American Churches and COPE, and 18 churches have all partnered with the county Public Health Department as the health impact has reached a critical point.

“As part of African American regathering, we want to use our churches as testing sites so our congregants can come to our churches, to a place where they feel comfortable,” he said.

Outreach and testing are set tentatively for the week of June 15.

“It’s not only for African Americans but it will be hosted at African American churches, it’s open to the community, but we want people to be tested in congregations where they feel comfortable,” Rev. Casey said.

To watch the Board of Supervisors meeting, see the http://www.sbcounty.gov/Main/Pages/ViewMeetings.aspx