Legislators are looking at the big picture that may expose how the pro-Trump seditious takeover of the U.S. Capitol happened, and dig deeper down to what extent white supremacists make up the ranks of law enforcement and the military.

Reportedly, six officers are now on paid suspension and 29 others are being investigated for their role in the January 6 insurrection.

But the FBI saw some telltale signs about 15 years ago, according to a partially redacted 2006 report that gained little attention back then. It is expected to help provide clues on how to spot or stop white supremacists if the unreadable portions become available.

Authored by Congresswoman Norma Torres (CA-35), H.R.1031 mandates the Attorney General prepare and release an intelligence assessment on white supremacy in law enforcement, and for other purposes. It has received support from the National Action Network and the Anti-defamation League.

Rep. Torres recently commented that the January 6 attack showed heroism within the Capitol Hill police force, but also some law enforcement officials stood with white supremacists in the riotous mob. 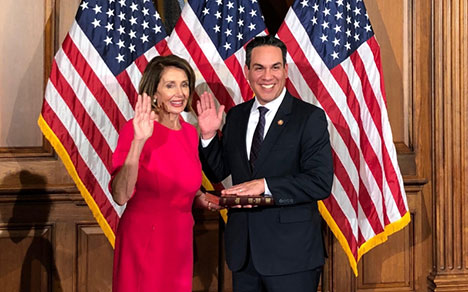 “This is not news for our Justice Department and FBI who issued internal assessments in 2006 about the threat it poses to our citizens and our democracy. White supremacist infiltration of law enforcement is a threat to public safety – the bill I’m introducing will demand an accounting for what the federal government has done about it, and provide an accurate depiction of where we are today. The only way we can truly address this scourge is by being clear-eyed about how prevalent it is, and I urge my colleagues on both sides of the aisle to join me in doing exactly that with this bill,” she said in a release.

In the 2006 report, the FBI warned of future growth and momentum of the white supremacist movement within law enforcement.

“Having personnel within law enforcement agencies has historically been and will continue to be a desired asset for white supremacist groups seeking to anticipate law enforcement interest in and actions against them. The potential for strategic attempts by white supremacist groups to infiltrate law enforcement will likely increase should the movement as a whole resolve some of its factionalism. This could occur either by existing groups resolving their leadership disputes and stabilizing their membership bases or by the emergence of new leaders or groups that could bring cohesion to the movement,” the report states.

If passed, the White Supremacy in Law Enforcement Information Act would require the entire original report to be made public, and the DOJ and FBI assess and describe the current relationship between white supremacy and law enforcement. They would also be mandated to submit all white supremacist infiltration or links to law enforcement for review from 2006, and updated into the future.

White supremacists have been on the rise in the past four years. According to the Southern Poverty Law Center, hate groups have increased 30% since former President Trump’s election.

Many people agree that domestic terrorists and racist extremists within the ranks of the military or law enforcement is a bad idea, but the question is how to get rid of them.

In a similar but separate bill, last month, Rep. Pete Aguilar introduced H.R.1088, legislation to Prevent White Supremacists from Infiltrating US Military. The bill is also based on a Department of Defense report that sheds light on how white supremacists have trained and gained combat experience, and rounding up new recruits into their organizations.

“This report confirms that white supremacist extremists are attempting to use our military to acquire training, new recruits and validity for their hateful and violent causes. I’m introducing the Shielding Our Military from Extremists Act to codify the recommendations laid out by the Department of Defense so that we can prevent these extremists from putting our service members in harm’s way for their own gain. It’s clear that we need cooperation across our government to solve this problem, and I look forward to working with my colleagues in Congress, the Department of Defense and the Biden Administration to get it done,” said Rep. Aguilar.

For civil rights groups that have been watching the increase in hate crime, both bills by Rep. Torres and Rep. Aguilar are long-awaited.

“Both of these bills tackle the urgent issue of ensuring that extremists do not embed themselves in and threaten the critical missions of police and military forces, and they do so with great care, ensuring that the civil liberties of people who hold these positions are respected and that measures we take to keep white supremacists and other violent elements out of these bodies cannot be misused against individuals who take part in legitimate and peaceful protest movements,” said a spokesperson at the Los Angeles ADL office.

Vaccines Outreach, Get the Jab