It’s hard to miss the endless parade of homeless people in back of the restaurant that Stacy Augustine has been building in Rialto for the past couple of years.

At his side hustle, he sees all types of people, all ethnicities each morning about 4:30 a.m. when he arrives at the site before heading off to his day job.

“There’s a whole other system that happens at night. They stop and ask questions, they don’t ask me for work. They want a bottle of water or use the bathroom. It’s nonstop. It’s heartbreaking,” he said.

Augustine has an electrical and general contracting business. He bought two parcels and condemned buildings downtown, tore them down, and is now building up his small grill and billiard business.

Over time, he worries that the homeless problem will cost the city more money, and it is growing across the nation. Locally, he notices a new type of homelessness.

“It’s not just the Ronald Reagan days when he released and stopped funding the mental institutions and let them all on the street. These are young people through 20 years old running the streets,” he said.

The solution is complex. Life training and jobs are needed, and a well-written plan could bring significant federal funding and grant dollars, along with private sector involvement.

Augustine envisions a central location to guide the homeless to wraparound services, where, eventually, they could move toward vocational training and the workforce. The eviction moratorium will also end at some point, adding to the problem.

Turning a blind eye now will make it worse, he said.

“This is the calm before the storm, about 1,000 people are dying a day. Through this eviction process, they’re not working. Some have two or three generations living in one home.”

Coming from urban south-central Los Angeles, he recalls old school job training, such as where he worked as a teen at the Watts Labor Community Action Committee that helped the most difficult youth. There, he learned many vital skills working with disabled kids. Each week he’d meet with his counselor who told him to sit up straight, and don’t slouch.

“Those techniques of doing a job interview or filling out an application, I still use those same techniques and still have paycheck stubs at $15.78 full check for the week,” he laughs.

Augustine holds his bachelor’s degree in Business Administration. As vice president and general manager, he manages over 300 at Biscomerica facility, where he has worked 26 years. In the past 15 years, he’s served as operations manager and vice president of manufacturing.

Over the years, he has also served as a transportation commissioner, as director of the Chamber of Commerce, and has chaired the Budget Advisory Committee.

Addressing homelessness is closely tied to vocational and trade school training, he said.

“We bring in young people to the facility and they want to make $20 an hour but they don’t have one skill set. They can barely fill out the application. It looks like chicken scratch,” he said.

Attracting more businesses that offer a living wage is the other side of the equation.

Damon Alexander believes that bringing back a strong neighborhood watch is the first step toward addressing the crime challenges facing not only his ward, but all wards in the city. He wants to energize community-oriented policing efforts.

Alexander envisions a multi-pronged approach with police, residents and education working together to make the city safer. He said neighbors concerned about neighbors drive crime down. 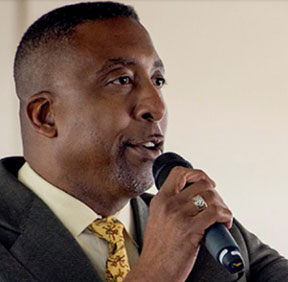 “You cannot police your way back to safety. It has to involve the residents, and shared responsibility,” said Alexander, a resident of San Bernardino for over 30 years.

Alexander is also immediate past president of NENA, the North End Neighborhood Association, where he recently finished his term in February before the pandemic. He said it’s a well run, well-attended association, and he’d like to see that model expanded.

He also created an 8 point police reform plan, and recently, he got a response from Kamala Harris.

“When you’re apathetic to crime, or what’s going on in your neighborhood and lay it all at the foot of law enforcement, that’s not going to work,” said Alexander, a veteran, and a retired federal law enforcement officer with the Department of Justice.

Infrastructure, including the city’s potholes, could present a major problem down the line if not addressed. Poor roadways also make for a bad impression when people feel they can’t drive on city streets, he said.

His own car’s suspension system was damaged from the pothole that couldn’t be seen in the rain, and cost a lot of money to repair. If the city doesn’t repair the potholes, and someone swerves to avoid a bad accident, he said there is potential for lawsuits because it is a public safety issue.

“That’s a public safety issue. We’re all going to try dodge that pothole,” he said. “If you dodge it and run into a light pole, there’s always that fiscal impact.”

These days, any talk of infrastructure or business must include COVID-19, and he said the city should brace for what’s coming. Many small businesses are impacted by the pandemic, and the uprising.

As a public safety commissioner for the city, he went out to survey the day after the riots to see what could be done. He said mom and pop stores may not have the business interruption insurance needed to survive, or to be compensated for their losses.

On the positive side, during the course canvassing his 7th ward, he’s come across many people that want to step up and get involved.

“They want to reactivate their neighborhood association, or start a neighborhood watch or they want to become a citizen’s patrol person with their police department. I’ve asked them to step up and they have because they know change begins with me,” he said.

For more information on the candidates, see: