George Floyd. He didn’t plan to die as a cause celebre, but he did. As did Ahmaud Arbury, Michael Brown, Philando, Trayvon and countless others. And America is discovering the weight of its crimes on the necks of Black Americans has been festering on its people.

All across the country, people of all colors and across all economic strata are standing, kneeling, protesting the deaths of Black men due to unchecked police brutality. While outside agitators try to steal the narrative by looting and destruction of property, the underlying sense that America has failed its citizenry in denying justice too often in Black communities is in full display.

There has been a sustained rage and sadness since George Floyd took his last breaths for all to see. The smug police officers who acted callously under color of authority, staring with impunity into the cameras because so many have been set free from their sins. It seems to be the straw that finally broke the camel’s back. Even the Blue code of silence has not survived this heinous crime.

Philando told the officer he had a legal firearm, and still the officer shot him. Walter Scott ran after being pulled over for a 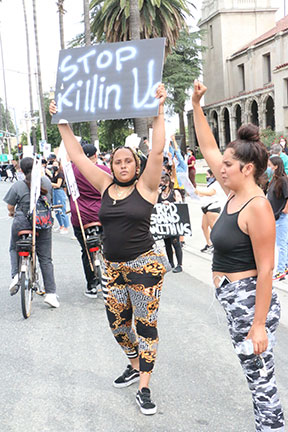 broken taillight and was shot in the back in cold blood. George Floyd was accused of passing a bad $20 bill. It cost him his life.

The sheer number of deaths of Black men and the ever-present harassment of people of color by police throughout the country has caused a burgeoning reckoning with the death of George Floyd. Black communities have wondered why they must endure such unfair treatment. Now others are wondering also. How could a peace officer put his weight on a man’s neck for more than eight minutes while other officers simply watched, even helped, rather than deescalate the situation.

Too often, Black men are considered threats, are considered perpetrators just by being present. They are racially profiled and are treated as guilty rather than presumed innocent until proven otherwise. Now others are coming to grips with realities that Black men face every day.

George Floyd’s death deserves more than a discussion about race. His legacy demands an overhaul of community policing. It demands that police officers be held accountable. It demands that Black men no longer be open targets for death and brutality by authorities whose purpose is to protect and serve.

No justice – No peace!