Fans of gamers of the League of Legends, Beyonce, Rihanna, and even Wu-Tang Clan should all be delighted that the Maestro Anthony Parnther is coming to town.

With knowledge spanning multiple genres and periods, Parnther is very connected in Hollywood to film and numerous concert audiences, not only as a conductor, but also as an internationally recognized bassoon player. He has performed and led a wide range of music from classical to contemporary with some of the biggest names on the planet.

After an intensive two-year search for a conductor, Parnther was recently appointed as Music Director for the San Bernardino Symphony starting the 2019-20 season. He was chosen among ten finalists from around the United States and Venezuela.

The Maestro takes the podium as the 16th music director of the San Bernardino Symphony since the local symphony began in 1929. Under his leadership, Parnther has crossed over to master an unexpected versatile repertoire of works with some of the finest performers and orchestras in the world.

He will also continue his commitment as the current conductor of the Southeast Symphony in Los Angeles, where he has served as music director since 2010.

As a youth, he recalls the start of his own musical journey from eighth grade when at least one motivating factor was the desire to get in on the real action – school trips and other fun theme park excursions. 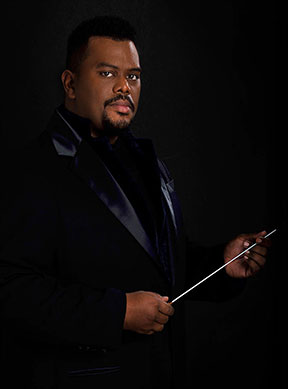 To do that, he first had to get in the band.

While sitting in math class one day, an intercom announcement caught his ear that all band members needed to report to the band room, and get on the buses for Disneyworld.

That was his cue.

“I thought, Oh, I’ve got to get in on this scheme,” he laughs. “I opened the dictionary with the A Section and decided I did not want to play the accordion. I moved to the B Section, and decided I was going to play the bassoon.”

Turns out, that was the right choice. It has put him in the spotlight of international demand. Since then, the Maestro has performed in 60 countries.

While he always wanted to be a gospel singer, he said he doesn’t feel that he was blessed with that particular talent. Even so, it just so happened a church performance helped get him in the mix that would change his future.

In 2009, while performing at Grant AME Church, he was tapped for his first opportunity on a motion picture soundtrack, which set the ball rolling on numerous other important works.

Granted, long before that so-called “big break” is where his success really started. He had already earned his Master’s degree years earlier in orchestral conducting from Yale University. He also studied conducting at Northwestern University, and education at East Tennessee State University.

In the coming months, his program will be as diverse as it has been internationally. Throughout the season, San Bernardino can expect several top performances.

In November, the Maestro is proud to announce the one and only Jennifer Holliday of “Dream Girls,” and in January, the Symphony pays tribute to the legacy of Dr. Martin Luther King Jr. The community can come out to enjoy American Idol finalist Jacob Lusk, and playwright Daniel Beaty will premiere a piece by three-time Emmy winning composer John Wineglass.

“The concert in January is a confrontation on America’s relationship with racism, which is one of the reasons we’re performing ‘Strange Fruit,’” Parnther said.

Into his new role, he hopes to re-open the doors of access for the local community into a new level of diversification of musical appreciation.

“I love any music that is compelling, and filled with beauty, and a lot of that music lies within classical music. I, for a long time, have been an advocate for bringing people into the concert hall,” he said.

Top of the line programming in the years to come also holds something special for the whole family, and allows access to fine entertainment. And it is affordable as tickets start at just $15.

“This offers a powerful live music experience to people who may not be able to afford the high ticket prices of certain touring acts or other live concert events. For people who may not yet have experienced a symphony orchestra, it is something not to be missed,” the Maestro said.