It just needed the meaning of a leader, a parade, and the desire to uplift the community.

Ellen Turner thinks back to one of the most memorable experiences that moved her mom to start the city’s Black History Parade in 1968, activated by a message from Dr. Martin Luther King, Jr. just two months before his assassination.

Not only was that year one of the most volatile in history, especially in the south, but the local community of Fontana also faced equally bad times under the Klan. Black people were only allowed to live in the underdeveloped area of North Fontana.

Then, her mother Jessie Turner, along with some other ladies in the community, were sitting around the table listening to a powerful sermon, the “Drum Major Instinct” that aired February 4. Dr. King spoke of human nature and ego, and the desire to beat the drum and lead the parade. But he emphasized that the most important step is of love and service to others.

That message inspired her to take action. The ladies pulled the local parade together to elevate the community, and expose the racism.

“The KKK was keeping us hemmed up in the [housing] track in that area. People were down and depressed about that,” Ms. Turner said. “They were giving up.”

The first parade was on a quick turnaround. Her mother had until the end of the month to make it happen. It wasn’t much bigger than their neighborhood, but included two well-known names of the time, Sanford and Son comedians LaWanda Page as Aunt Esther, and Whitman Mayo, as Grady, who lived around the corner. Her mother knew his mother.

To this day, most Black history parades happen at the start of the month, but she said it was important to keep the timing that her mother started 51 years ago. 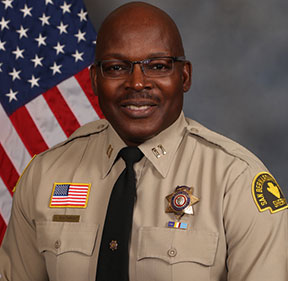 On February 23, the drill teams will step and batons will twirl starting the 51st Black History Parade & Expo from 10:00 a.m. to 3:00  p.m. The parade lineup starts at Summit Ave and Citrus to Sierra Lakes Parkway,  Home Depot parking lot for the Expo.

Classic car clubs will escort the Grand Marshals and dignitaries, along with a stage at the Expo, recognition of the Miss Black Awareness Queens, and the battle of the bands and live entertainment. Christian Hunter, Kaiser High School’s star football player, will be in the parade, and lead the Kaiser Marching Band.

The event, presented by the Concerned Citizens for the Development of North Fontana,  and Black Awareness Parade committee, marches forward this year under the theme, “City Pride” to spotlight African American first responders.

Turner said the parade is especially in honor of their contributions, and recognition of those that have paved the way.

She reached out to all cities in San Bernardino County to get the names of African Americans on the front lines, police, firemen, emergency personnel, ambulance drivers, and she is still waiting for more names to trickle in.

The parade will also recognize the Epps family, and Johnny Epps, who returned home from WWII to become the first Black policeman in San Bernardino County.

“Our goal is to have a ticker-tape parade without the confetti because we want to cheer on our first responders for the work they do, and the sacrifices they make,” she said.

The other main goal this year is to encourage and get more young African American men and women interested in pursuing rewarding first responder jobs.

“How to get up in rank? With Captain Boatwright, and Lt. Williams, they’ve achieved that,” she said. “There are people right now up in rank and first responders, and so the community can say, I can do that too.”