A lot hinges on keeping local services going for kids and youth, like the decades-long activities the community has come to depend on at the San Bernardino Boys and Girls Club.

The question now pending a city decision is exactly what’s to become of the 9th Street facility.

There could be a merger with another Boys and Girls Club, or the facility could continue to operate with all the same services, but with a new name.

Recently, the national Boys & Girls Clubs of America revoked the local San Bernardino charter for being out of compliance, a claim that the club’s CEO and President, A. Majadi denies.

“We didn’t lose a thing. They took it. We were in compliance,” Majadi said. 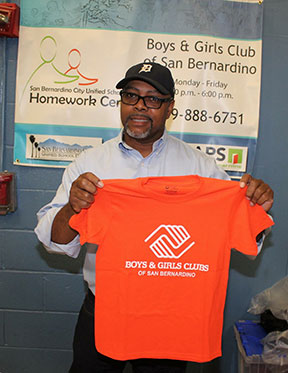 On Thursday, September 27,  community members are invited to come in and talk about their concerns at 5:30 p.m. about the transition from the Boys and Girls Club brand name to the Center for Youth and Community Development.

“We’ll be available to answer why, and what happened,” he said.

Majadi said they appealed to national Boys and Girls Club, but haven’t received a response. He said the impact has been hard.

“It’s raised questions on integrity, structure and administrative abilities. Folks [have used it to] spread all kinds of lies, our kids at risk, or not managing our money, none of which is true,” he said.

He challenges accusations from the national organization that the local club violated a background check policy as the club has always adhered to  “real-time” voluntary background checks that are more aggressive than national requirements.

Through the years, Majadi said city council and mayors have not supported the club as it deserved. The lease on the building calls for the city to administer all repairs, maintenance, and provide custodial services, which they failed to provide through five years of bankruptcy, he said.

San Bernardino Unified School District also contracts with the San Bernardino Boys and Girls Club for after-school programs. He said his board has provided all communication to the district regarding the national organization, appeal letters, financing, our structure, and taxes. Upon review, the school district recommended to continue and renew the contract.

Majadi came on board with the local Boys and Girls Club ten years ago when he said the club was in disarray and redevelopment dollars were no longer available. For five of those ten years in bankruptcy, the city provided little or no support.

“When I came into the organization, they were hundreds of thousands of dollars in debt with major tax problems and a facility in disrepair with asbestos. We turned everything around, including renovation of the facility. No one talks about that,” he said.

He said they put in a half million dollars over ten years, plus refurbishments, and the cost to run the facility, including the last five years of maintenance. And, more recently, $40,000 on the pool and a heater.

Whether the national Boys and Girls Club comes back into a relationship or not, he said he plans to keep program and services the same, except for the name change.

The facility has been running well, he said. The daycare program is on a waiting list.

The club’s lease expires with the city in 2020. At the very least, he hopes the city honors that lease until termination.

There has been talk of bringing in another organization, such as Redlands or Fontana Boys and Girls club for the sake of keeping the brand name, which he feels is a slap in the face.

“Services don’t stop, the question is do we do it here on 9th street, or do we have to do it somewhere else?” he said.

For many, the local Boys and Girls Club has historic beginnings going back to 1967. The club was then formed by the late Art Townsend, founder and publisher of the Precinct Reporter, along with the late Jack Brown, CEO of Stater Bros. Markets, former Mayor Patrick Morris, and Attorney Bruce Varner.

Former club board member Dolores Armstead said that she and several other community members take issue with the delay in announcing that the charter had been revoked.

She said they didn’t learn until June that the charter was pulled in February, and that the wheels appear to have been in motion much earlier.

Armstead, who last served on the board eight years ago, said that losing the charter is not a quick process.  Had the community known earlier, she said they could have acted quickly to advocate to retain the charter.

“Why didn’t he reach out to the leaders in the community?” she said. “We as a community would have come together to say what can we do to save you? Nobody knew community-wise until the end of June,” said Armstead.

Dr. Will Greer expressed his own appreciation for decades of help that the San Bernardino Boys and girls Club have brought to the community. He recalled as a young teacher hosting the Malcolm X/Ujima Saturday Academy to mentor local kids at the facility, and how so many local community groups utilized meeting space for free.

Kelly Imbriani of Westbound Communications said that the city’s decision on the lease has not been made at this time. She said the staff is in the process of obtaining additional information as directed by City Council in order to provide the Mayor and City Council viable and sustainable options for the provision of services moving forward.

“Angry about how the San Bernardino Boys & Girls Club seems to be getting taken from us, right under our noses. That center has been a pillar of the community for as long as I can remember,” Greer said in a Facebook posting.

“The point is the San Bernardino BGC means everything to this community. Under Majadi’s leadership, I’ve only seen it grow and expand its services for kids and young adults. Truly feel like we shouldn’t stand by and watch the national organization take their charter without speaking out,” he wrote.

“SBCUSD consulted with our legal team and based on the information we have, it was decided to continue our contract with the organization now known as the Center for Youth and Community Development,” said Bardere in an email.

Student safety is their number one priority. For that reason, she said they will continue their contract with the Center for Youth and Community Development so the students at 13 schools will not have an interruption in their after-school program.

“All vendor contracts, including the Center for Youth and Community Development’s contract, are evaluated on an annual basis. The decision for future contracts with vendors is based on past performance and District needs,” she said.