If you have been missing that irresistible disco beat of the 70’s, “SUMMER” is where you can find it– “SUMMER: The Donna Summer Musical,” that is, now in its final weeks at the La Jolla Playhouse. Directed and co-written by Des McAnuff (along with Colman Domingo and Robert Cary), this production takes us full-throttle through the remarkable life of the artist we’ve come to know as the Queen of Disco. Hers is an extraordinary journey from her childhood, one of seven siblings in Boston in a loving church-going family, where she dreamed of “singing like Mahalia” to her meteoric rise as an internationally acclaimed icon of the disco era.

What price fame is one of the questions explored in this intriguing production, which is ultimately a celebration of her music (twenty-five songs in all, many her own compositions), but also turns a lens inward to the complex emotional challenges she faced in trying to reconcile her public and private selves.

“Donna Summer is one of our African American icons,” says Tony-winning LaChanze, (Broadway’s Celie in “The Color Purple), one of three actresses who portray the iconic disco phenom.  “She won an Oscar, several Grammies and countless accolades, yet her story has never really been told, particularly in the theatre.” LaChanze, who has extensive film and television credits besides a rich theatre resume, was excited to take on the role of Diva Donna, who narrates throughout and is counterpoint to “Disco Donna” (Ariana DeBose) and “Duckling Donna” (Storm Lever). 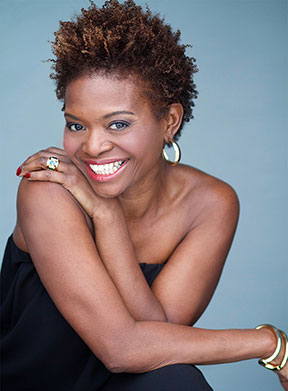 LaChanze is the first Donna we see, a mature and accomplished Diva in a dazzling opening number. She lights up the stage in a glittering blue gown, an ensemble of dancers and musicians all a-sparkle around her. A multimedia backdrop projects images of Summer, fragmented sketches of her eyes and her mouth, and we see the theme begin to emerge, as Summer sees her own life in fragments, in terms of family, racial identity, relationships, abuse, a broken marriage,  public image; and she struggles to put it all together “The play is not about fragments,” Diva Donna reflects later, “because fragments means that it is broken,” but, rather “it’s about facets that make up an exquisite jewel.” In the course of the play, we see a full and complex figure emerge that indeed sparkles like a multi-faceted jewel.

Telling the story with the three Donnas, moving forward and backward in time, gives a unique perspective, and each actress shines in her individual portrayal. LaChanze is a powerhouse with a magnetic presence—“She Works Hard for the Money” is a standout–but perhaps shines brightest on the show-stopping “”Friends Unknown,” her voice heartbreakingly gorgeous on this song of thanks. “For me it was a deeply moving moment in the show,” the songstress reflects, adding that she drew on her love for a friend she had lost not long ago. Listening, you might have to wipe away a tear or two. Ariana DeBose, an original “Hamilton” cast member, as Disco Donna, is brash yet vulnerable and her delivery of “On the Radio” rocks the house, and Storm Lever (“Freaky Friday” at La Jolla Playhouse) as Duckling Donna, is tiny but enchantingly mighty, belting out “On My Honor” in a riveting church scene. “People say I sing like a police siren,” a young Duckling Donna laments, to which her mother replies, “You have a gift from God.”

With an all-female ensemble, some dressed as men, these statuesque beautiful women, decked out in lavish 70’s attire—hot pants, bell bottoms, platform shoes, top hats–was in part a nod to the mystery and androgyny of the era, but even more, made a brilliant statement that this is a piece celebrating the power of women. With an eye toward current events sweeping the country, the timing of such a motif could not be better.

Donna Summer was much more than the “First Lady of Love,” so dubbed in part after her erotically recorded “Love to Love You Baby” (discharged suggestively to perfection in the show), and, as we learn, fought hard to separate her disco persona from her private life, to no avail. “The song took off before she could control it and she had to catch up,” LaChanze says of her struggle to maintain her own sense of identity and self-respect.

In the end, Diva Donna, looking back on her life muses, “It was a great party, and I was the party.” True enough, and with the closing number “Last Dance,” we end on a high note, disco ball spinning wildly, confetti raining down from the sky, and Divas, Discos, and Ducklings taking their bows. Yup, this show is “Hot Stuff.”