“Head Of Passes” Now At The Taper

Academy Award winner and playwright Tarell Alvin McCraney’s “Head of Passes” has opened at the Mark Taper Forum. Directed by Tina Landau, the poetic and powerful new play, which is part of Center Theatre Group’s 50th anniversary season at the Taper, continues through October 22. 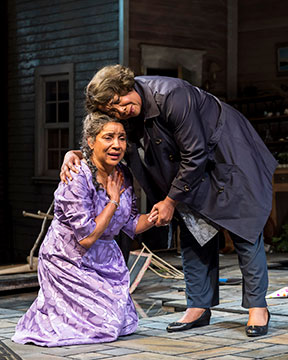 Family and friends are gathering to celebrate Shelah’s (portrayed by Rashad) birthday under the leaky roof of her home at the mouth of the Mississippi River. But an unwanted birthday party and unrelenting rains are only the first challenges in this contemporary parable inspired by the Book of Job in which unexpected events turn the reunion into the ultimate test of faith and love. As her world seems to collapse around her, Shelah must fight to survive the rising flood of life’s greatest challenges in this poetic and piercing new play. When “Head of Passes” was presented at The Public Theater, Ben Brantley of the New York Times said, “… in her remarkable, pull-out-all-the-stops performance in Tarell Alvin McCraney’s ‘Head of Passes,’ Ms. Rashad gives the impression that she could definitely hold her own on Shakespeare’s blasted heath. Portraying a sorely tested Southern matriarch, she can be found railing against God and the elements with a harrowingly Learlike rage.” Linda Winer of Newsday observed, “If Phylicia Rashad had not already taken us on formidable journeys through the world of August Wilson and so many other formidable dramas, it would be tempting to call Shelah, the matriarch in ‘Head of Passes,’ the role of a lifetime.”

Tarell Alvin McCraney co-wrote the Academy Award-winning film “Moonlight,” which is based on his play “In Moonlight Black Boys Look Blue.” The film earned him an Oscar for Best Adapted Screenplay. McCraney is an ensemble member at Steppenwolf Theatre Company and founding member of Teo Castellanos/D-Projects. In addition to the MacArthur “Genius” Grant, he has received the Doris Duke Artist Award, Whiting Award, Steinberg Playwright Award, Evening Standard Award for Most Promising Playwright, The New York Times Outstanding Playwright Award, the Paula Vogel Playwriting Award and the Windham Campbell Award. He was International Writer in Residence for the Royal Shakespeare Company (2009 to 2011) where he remains an associate artist. McCraney is the Artistic Director of the Youth Arts Leadership Summer Program. His Public Theater productions include “Head of Passes,” “The Brother/Sister Plays” and an edit of “Antony and Cleopatra.” “The Brothers Size” was a part of the Under the Radar Festival and other credits include “Choir Boy” and “Wig Out.” McCraney is the chair of the Department of Playwriting at the Yale School of Drama. He is developing a new TV series for the Oprah Winfrey Network.

The Mark Taper Forum is located at The Music Center, 135 N. Grand Avenue in Downtown L.A.