100 Black Men: Rad Robotics and the Future of Cool

Robotics and coding for the boys in the 100 Black Men in Long Beach programming have been a futuristic vision for Howard Perry for a long time coming.

Through a recent collaboration with a local educational non-profit, some of their programs came to life, giving rad robots, technology and engineering a new definition of cool.

Lego robots, about the size of small hobby cars, got the boys thinking about potential jobs in Artificial Intelligence fields. 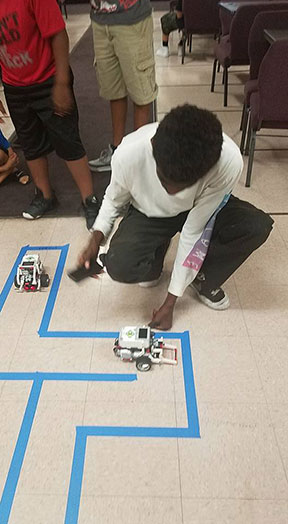 Perry, a mentor and charter member of the local chapter of “the 100,” said the idea was to bring a rudimentary understanding of robotics to the kids, along with their regular growth mindset motivational training.

The weeklong program provided an intensive foray into the world of robotics that is evolving in so many STEM fields. At first, the kids couldn’t make the robots move in a straight line. By the second day, they had to make it turn right. By the end of the week, they conquered the assignment.

After the class ended, he said they conducted interviews and were surprised to learn why the boys took the class.

“Many of the boys said they wouldn’t have come out if their moms hadn’t pushed them,” he said, adding that those same kids are now considering engineering degrees because they learned the process is not so difficult.

Another benefit is the chance for decent pay and equal access to employment.

“If you have the technical skill, it doesn’t eliminate racism, but it limits it because they need you for your specialized skills, you’re a commodity,” he said.

However, he is concerned about how parents hinder the natural flow for some kids by instilling fear. Many STEM careers require a strong math foundation.

“A lot of these kids have fear put into them by their parents or their environment,” he said. “We have to get past that because these kids are brilliant.”

The 100 Black Men of Long Beach is still strong on President Obama’s My Brother’s Keeper program.

Their robotics program is in collaboration with Shared Science, a program certified by Long Beach School District, which he said has been very supportive.

“We do a lot of things that are not in our manual, we just want them to be successful,” he said. “This summer we gave them a whole lot. We gave them a literacy academy, robotics. They will have a moot court before the end of the year.”

Since starting in 2008, they are now well over their 100th session, he said the 100 Black Men have never missed the third Saturday. Mentors are dedicated, and it is paying off.  The best part is seeing some young men, now grown, come back from their universities to mentor other young men.

Dr. Lance Robert, mentoring chair of 100BMLB, said that so far, academics, history, law, literature and school competition have been a priority, but robotics is now a great addition to the program.

He said they were happy to incorporate the Shared Science approach where the boys learned logic models of programming.

“The instructor had them put tape on the floor and go through obstacle courses,” said Dr. Robert, also a political science professor at Los Angeles Southwest College. “By the end of the week, these boys were making robots go through mazes.

Every day, their programming is busy with calls for help, and mentors are dedicated to catching the kids at risk of falling behind.

“We are trying to puncture a hole in the pipeline [to prison],” he said. “Not only that, but we want to get them to the top of the class. I can say that we have closed the gap with our kids.”