Redlands Jumps to #20 After Impressive Win

It was announced recently that the University of Redlands football team climbed five spots on the D3football.com Top-25 Poll for week one to No. 20 in the nation.  The Bulldogs impressed in their opening game by firing off 32 unanswered points en route to a 32-7 win over the Trinity University (TX) Tigers.

Redlands is the only Southern California Intercollegiate Athletic Conference (SCIAC) school included in the week’s rankings. 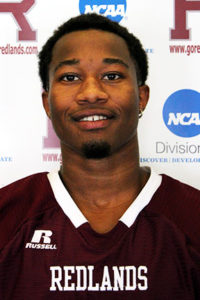 During the Bulldogs most recent victory, the Maroon and Gray effectively moved the chains for 13 first downs, 327 yards of offense, and a 2-for-2 showing in the red zone.  Junior quarterback Levi Plante, junior running back Camryn Davis, and sophomore wide receiver Mitchell Nickovich each scored a touchdown, while junior kicker Nathan Hierlihy lit up the scoreboard for 13 points on four field goals, including a record-setting 55-yarder, and one extra point.

Redlands strives to maintain this momentum into the bye week, as it prepares for a September 16 contest at George Fox University (OR).

The University of Redlands women’s soccer team faced Shepherd University in a non-conference match under blue skies recently at Farquhar Field. The women found the back of the net 20 times by 11 different goal-scorers for a record-breaking afternoon.

The Bulldogs jumped on the board in the fifth minute when sophomore forward Hanya Loskutoff fired a shot past the Thundering Herd goalkeeper. Only a minute later sophomore midfielder Alexa Groesser duplicated Loskutoff’s efforts to make the score 2-0.

Groesser and junior forward Adi Fellows went on to have a record-breaking day with Groesser resetting Redlands’ single-game goals standard with four, while Fellows matched the now second-place stat with three.

Loskutoff and junior forward Madison Mills both tied for Redlands’ most single-game assists, each serving up three.

In addition to the individual record-breakers, Redlands reset the single-game total goal record by an impressive seven goals, with second place now sitting at 13.

The Bulldogs (3-0) are riding high as they looked forward to kicking off conference play, when they travel to Cal Lutheran University to face the Regals.