Like Mother, Like Daughter: Singer Erica Campbell, one half of the duo Mary Mary, is one proud momma. Her daughter Krista Campbell recently won the Little Miss African American Scholarship Pageant, and sang at a recent he LA Sparks basketball game. “The Little Miss African American Pageant is first and foremost an educational program cleverly disguised in a pageant format whose mission is dedicated to the intellectual success of your African American girls,” the program’s creator Lisa Ruffin told the LA Sentinel. Campbell shared the videos of Krista singing ‘Climb Every Mountain’ at the LA Sparks game.

Through the Storm: Singer Yolanda Adams is lending a helping hand to Houston residents dealing with the aftermath of Hurricane Harvey. Adams, who is a Houston native, reached out to her extensive network of “millionaire friends” to help those displaced by the hurricane. “Thanks so much for your support and prayers. We’ve given out over $100K of Simply Yolanda to the folks displaced by the storm,” wrote Adams, host of The Yolanda Adams Morning Show which airs weekdays from 6-10 a.m. EST. Simply Yolanda is the multiple GRAMMY® 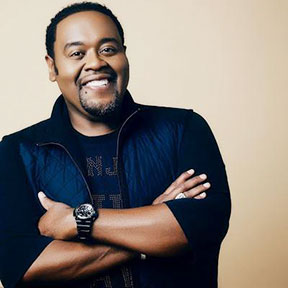 Award-winning singer’s business umbrella that sells an array of goods, including coffee, and bath and beauty products. It operates out of Houston, which Adams says is “one of the most multicultural, multi-business, and multifaceted cities pretty much in the world.” “I’ve housed people, fed them and prepared food for First Responders. As with Katrina, this will be a year-long mission to make lives better,” continued the 56-year-old in Sunday’s Facebook update. Adams, who organized the donation drive by gaining supporting by wealthy friends, has partnered with AngelHeart Productions and Voice of An Angel Foundation.

Back on the Scene: Darwin Hobbs known for his powerhouse vocal, stepped away from recording music for a few years to focus on his personal healing, his family, and his ministry as a worship pastor. Fans will be happy to hear that he is with the release of “Call the Name of Jesus.”

“Call the Name of Jesus” is released on HeartArt Music, the label started by Hobbs and his wife Traci. The single features the production work of producer Aaron Lindsey.

“I had been singing this song in worship service for a while, it is totally befitting considering all that our society is facing,” says Hobbs. “The message is clear, those who know Jesus need to call on Him and call on Him fervently.”

Hobbs will minister at churches around the country throughout the fall. Briefly, Lecrae has released the ‘Hammer Time’ dance video featuring 1K Phew from his upcoming album ‘All Things Work Together.’ In Lecrae’s video for ‘Hammer Time’ a group of young folks are dancing  under a bridge wearing their ‘God is Dope’ T-shirts. Finally, Todd Galberth’s new project “Decrease” has dropped. The album was highly-anticipated after the leader single, “Lord You Are Good” received lots of spins on radio. With the release, a new single, “Your Great Name” has landed in the top ten and nabbed the #1 spot on iTunes.

This week’s scripture:  Rejoice in the Lord always. I will say it again: Rejoice! Philippians 4:4 NIV