Natural Beauty: Actress Rashida Jones of Angie Tribeca is teaming up with Almay to launch the brand’s “Reveal the True You” movement. With her new role as Almay Insider, the producer and screenwriter will not just be the pretty face of the brand but will work hand in hand with Almay as part of a relaunch, which includes an expansion of shade ranges and greater diversity among those representing the brand. “When it comes to beauty, I’m just not into homogeny,” says Jones, who co-created, wrote and will appear in a series of videos aimed at encouraging self-expression and embracing individual perceptions of beauty. The 41-year-old daughter of actress Peggy Lipton and 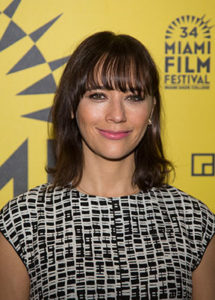 music mogul Quincy Jones recalls that growing up “there wasn’t a ton of representation for biracial people” such as herself.  “I remember seeing Vanessa Williams win the Miss America pageant and thinking, ‘Oh that looks like me.’ But until then — and not many times after [while] growing up did I necessarily feel beautiful because I wasn’t like the standard beauty that everyone was looking to.” And Jones admits there was a time when her self-confidence plunged. “I had this idea that if I looked like somebody else or if I acted like somebody else or if I had somebody else’s career or face or hair that my life would somehow be better.” Today Jones view of beauty is not based on what mainstream society thinks.  Instead, she says, “the only way that I can make my life better is to be myself and be okay with that.”

Cali’ Living: Producer Tyler Perry has reportedly handed over $14.5 million for a home in Mulholland Estates, a gated community bordering Sherman Oaks in Southern California. According to the L.A. Times, the 4-acre estate was built in 1992. The publication also notes that “Pyramid-shaped skylights and angled ceilings create volume while bathing the 17,245 square feet of living space with natural light. Common areas include living and dining rooms, a media room and an office/den.” “The master suite has one of three fireplaces and windows that take in the grounds. In all, there are seven bedrooms and 11 bathrooms.” “A resort-style swimming pool, stream-fed koi pond, north-to-south tennis court and modern statuary fill out the backyard. A motor court sits off the entrance and has space for more than 30 vehicles.” The seller of the property “was the estate of Alfred E. Mann, the billionaire inventor and physicist who died last year at 90.”

Fighting Back: Bobby Brown has changed his mind about appearing as a contestant on season 25 of Dancing With the Stars. “Bobby Brown was originally slated to be on this new season of DWTS, but recently pulled out,” one source said. In other news, Brown has just filed a lawsuit to stop a film about his late daughter Bobbi Kristina from airing. “Bobbi Kristina” is set to premiere on Sunday, Oct. 8 on TV One. In court documents, Brown claims that the TV One defendants “knowingly and maliciously” used his persona and life in the movie and promotion of the film. Brown also claims in the court documents that the movie “contains defamatory and untrue depictions” of him “being violent” towards the late Whitney Houston. One line in the documents states that the biopic “contains defamatory untrue depictions” of Bobby and Bobbi Kristina’s relationship, with scenes “suggesting” that Bobby “does not love his daughter.” In addition to keeping the made-for-TV movie from airing, Bobby also is seeking over $1 million in damages. Finally, Tia Mowry, who just finished the third season of her cooking series ‘Tia Mowry At Home,’ has landed a recurring role on the new CBS comedy ‘Me, Myself & I’ according to Deadline. Me, Myself & I is a comedy about the defining moments in one man’s life (Alex Riley) over three distinct periods — as a 14-year-old in 1991 (Jack Dylan Grazer), at age 40 in present day (Moynihan) and at age 65 in 2042 (John Larroquette).