College of the Desert Football Standouts Sign Letters of Intent

COD Football had three players sign their national letters of intent as offensive lineman Eric Kareem and Kevin Parise and wide receiver Marquis Kingery will be moving on to play at the 4-year level. 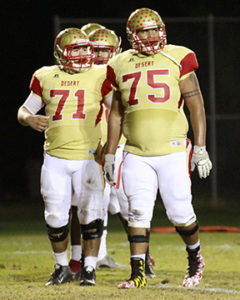 In 2015, wide receiver Marquis Kingery was a second team All-Mountain Conference in his sophomore year with the Roadrunners. In his two season with Desert, Kingery racked up 1,077 receiving yards on 75 catches and 15 touchdowns. His best season was his sophomore season, where Kingery was the number two target for Roadrunners quarterback Stephen Johnson II, averaging 15.7 yards per catch and tying team-leading receiver Tristian Buyck with 12 visits to the end zone.

Kingery’s best games of the 2015 season were at home against San Bernardino Valley, where he caught 10 passes for 198 yards and 3 scores in a 53-34 demolition of the Wolverines, reclaiming the COD-SBVC Challenge Trophy. Later in the season, at home against Victor Valley, Kingery had his best yardage game of the year, catching 17 passes for 225 yards and 2 touchdowns in a narrow 49-46 loss to the Rams. Kingery will be attending Middle Tennessee State.

Under third-year head coach Jack Steptoe, Desert finished the regular season with a record 6-5 overall and 4-1 in conference. As a reward for winning the American Division-Mountain Conference title and going to the Patriotic Bowl, Coach Steptoe was handed Coach of the Year honors.

This was the first Coach of the Year award for head coach Jack Steptoe, who is in his 23rd season overall, who guided the Roadrunners past their 0-2 start of the 2016 season, turning their fortunes around immediately, securing their first Bowl appearance since 2011. As a reward for their winning record, the team was bestowed with six first team All-Mountain Conference honors, including the Conference Defensive MVP and five second team All-Mountain Conference honors.

Midland University is located in Fremont, Nebraska. The MU Warriors play at Roger Heedum Field and the team is coached by second year head coach, Jeff Jamrog. In the 2016 season, the Warriors finished 4-4 in conference play ending the season in 5th place, with an overall record of 7-4. MU is in the Great Plains Athletic Conference of NAIA.

Morgan State University is located in Baltimore, Maryland. The MSU Bears play at Earl Banks Field at Hughes Stadium and the team is coached by second year head coach, Fred T. Farrier. In the 2016 season, the Bears finished 3-5 in conference play ending the season in 9th place, with an overall record of 3-8. MSU is in the Mid-Eastern Athletic Conference of NCAA Division One-Football Championship Subdivision (FCS).

Middle Tennessee State University is located in Murfreesboro, Tennessee. The MTSU Blue Raiders play at Johnny “Red” Floyd Stadium and the team is coached by 12 year veteran head coach, Rick Stockstill. In the 2016 season, the Blue Raiders finished 5-3 in conference play ending the regular season in 3rd place, with an overall record of 8-5. MTSU would wrap up the 2016 season on Christmas Eve in the Hawai’i Bowl against the University of Hawaii, falling 52-35. MTSU is Conference USA-East of NCAA Division One.